Well another year has passed, and I must say that 2012 was definitely a lot better than 2011.  Mike and I went back and looked at our 2012 goals and made some new ones for our “goal board” for 2013.  It gets me so excited about things!  This year is going to have a lot of changes, but it will be way cool to see how our family grows.

The picture above was taken on New Years Eve right when Mike came back from his last bike ride of 2012.  I was taking random pictures that day because I was being sentimental about everything being the “last thing of 2012”.  If you look closely, you will see he is not wearing any shoes because he had already come in from his ride. 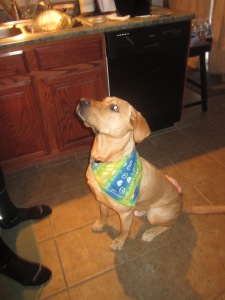 This was the last picture of Barney in 2012.  I’m sure there are plenty more to come.

We ended up going over to Mike’s parents house and hung out for a few hours and played games and ATE A LOT!  I blame the 20 pounds of pregnancy weight on the holidays.  I am SO GLAD they are over, even though we were very blessed this year with a great Christmas and New Years.  Everyone has been so generous and supportive of us. 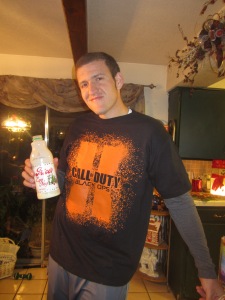 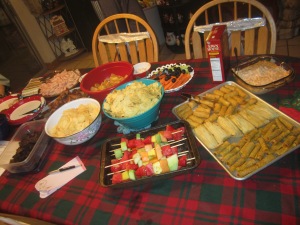 So much food!  We played a little Catch Phrase and hung out until it turned midnight and then we had to take a family photo.  P.S. We do not ask Barney to pose every time.  He seriously does it himself!