Skip to primary content
So we have a 12 hour race on Saturday in Ruidoso, New Mexico.  Mike is excited because he signed us up for a four man coed team.  The reason why he did it was that there is a greater chance to podium if you are on a coed team because there will hardly be any people signed up for it.  Most people want to race all boys or all girls.  We were hoping to be the only team.  As a matter of fact, we were the only ones that were signed up as of Saturday.
Well….they extended the deadline and guess what happened?  A group signed up.  Tonight I got a frantic phone call from Mike while he was out biking and he tells me to check out the group.  Usually when we race we will look up the roster and start measuring up the competition by Googling or looking on nmcycling.org for people who have raced before.  My senses told me to look on Google first because the girl signed up was from Tucson, Arizona.  And this was the first link I got: 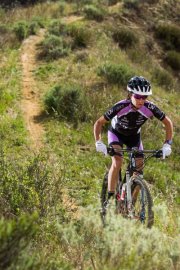 “Women of Giant: Cindy Lacotta”
Cindy Lacotta, Giant’s only female account executive, sets a precident for reaching out to new riders and growing the women’s cycling community in her Southwestern territory. Cindy, truly a jack-of-all-trades, has worked as a as an electrician for stage productions, usually running a spotlight (citing that she’s seen Cats waaaaay too many times), has a background working in bike shops, and as you’ll read in a few minutes, has even been part of an archeaological dig!
In case you don’t know, Giant is a maker of mountain bikes and road bikes.I have some work to do…