Sorry for the delay on my Fourth of July post.  Let’s just say it was a VERY hectic week last week.  My dad and his wife came into town, all ten children of my husband’s family were in town, we had to speak in church, I had to teach Sunday School, and try to figure out how to time everything just right.

Fourth of July Madness is a good way to title this post.  Let me tease you with a picture of Debbie (Mike’s oldest sister) and a burnt hole in her t-shirt. 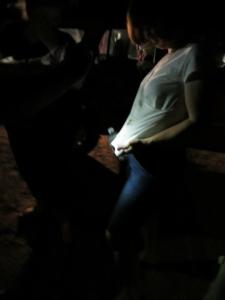 We’ll get to that in a minute.  🙂  Like I said before, we don’t mess around when it comes to Fourth of July.  There is always a steak barbeque, games played, some fireworks watching, and the best part is the lighting of our own fireworks. 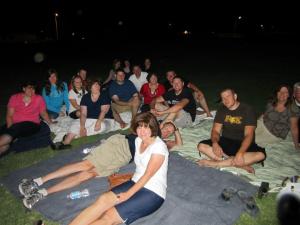 After our big meal, we took off to a local middle school to watch the city’s firework display, which was not a disappointment.  While we were waiting, the boys had to banter back and forth making fun of people, which led to some major laughs.

Then we headed back to the house where a “brother” (who will remain nameless due to the fact that he may or may not have picked up illegal fireworks) had brought some fireworks from out of state to have some good old fun with the family.  The audience was amused by the awesomeness. 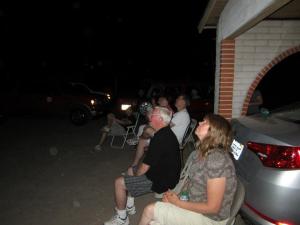 Then it happened.  One of the fireworks was placed on the ground a safe distance from the crowd.  Little did we know, it was placed the wrong direction. 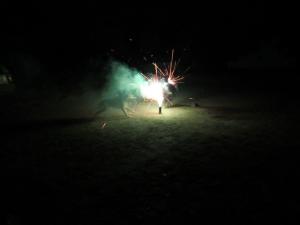 The fireworks then turned on the audience and lasted for about three minutes hitting walls, roofs, chairs, and people.  Even though I am laughing about it now, it was pretty scary.  Thankfully, Debbie only got a “holey” shirt in the process.

No animals or people were harmed in the process.  After the “incident”, we were very careful about the placement of the fireworks and it ended up being a pretty good show.

Question:  Do you have any “incidents” with fireworks where it went a little too wrong?

I was reading in San Diego where the fireworks all went off in the first 15 seconds because of a computer glitch….how sad!