Olivia didn’t just have a small birth story.  Her story extends a week into her life.  The day after Olivia was born, we received some pretty bad news.  About five hours after I had Olivia, two doctors came into the room and told us that Olivia had a fracture on the back of her head.  They asked us for permission to do a cat scan. We agreed to it and then went to check on her.

It was the first time I had seen her since the birth and she looked totally different! She was a little pale and she seemed really irritable.  The nurse told us that she had stopped breathing a couple of times and that she possibly had anemia and needed a blood transfusion.

I went back to my room to meet my sister, when we had a bigger group of doctors come in.  They explained that our hospital was a very small hospital and that when they got the results from the cat scan, that it looked like there was blood on the brain.  They wanted us to transfer her to El Paso where they could send her to Las Palmas, which had a NICU that specialized in brain trauma.

We were a mess.  The worst part was seeing her in a box being wheeled out to the ambulance.  Mike rode with the ambulance while my sister and I rode in the car behind them.  Yes, that’s right…not even 12 hours later I was leaving the hospital in stitches.  It hurt soooo bad!

Olivia stayed at Las Palmas for a week.  When she first showed up she was given two blood transfusions and put in the back of the NICU where the critical babies stayed.  The nurses said she was pretty irritable and were wondering if it had to do with the fracture.  Personally, I think she was irritable after being poked and prodded so much.  Mike and I were so worried that she wouldn’t know who we were.

We were lucky enough to have the Ronald McDonald House offer us a place to stay so that we wouldn’t have to go back and forth so much from El Paso to Las Cruces.  I have heard of the charity before, but I am amazed at how wonderful the people were and how wonderful a place it was! 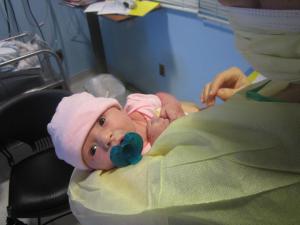 The first day was spent with two blood transfusions.  They wouldn’t let us hold her because of how irritable she was.  It was so hard!  She was so pale and looked so tired. Poor girl.  We were able to slip in and take some pictures while Jen was visiting and got some pictures taken.

During the visit, I was still having some complications and had to stop by the ER to get things checked out.  Mike and I were starting to get a collection of bracelets. 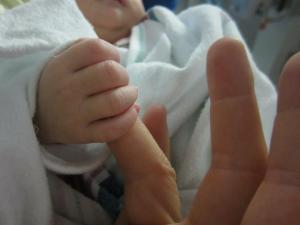 By day two, she was already looking better.  She started to get color back and we were able to hold her, feed her, and change her diaper.  They took her down for a MRI and we patiently waited the results.  They said that there was blood, but that it was in a spot between her skull and the brain.  The blood was not touching the brain, but we still needed to watch her.

Our niece Carolyn gave Olivia this doll at her baby shower, so we brought her along to keep her company.  When we met with the doctor about the MRI, he was pretty positive about her recovery.  He still had to tell us that there was a 1 percent chance of some issues later on in life, but wasn’t too worried about it. 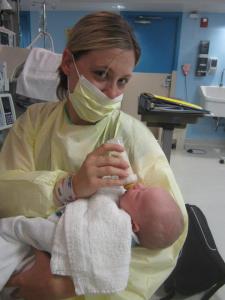 Every day we went when visiting hours were available.  It was nice to have the Ronald McDonald House to go to when the NICU closed.  Mike and I took turns feeding her, changing her, and burping her.  It was good practice for when we had to take her home.  She had to stay at least for a week because of the antibiotics she was on.  The doctor told us if he sent her home, he didn’t want a sick baby coming back right away.  She was getting better and better each day.

By day 5, they moved her to the back room where the healthier babies were.  It was a lot quieter considering all the noise from the monitors in the NICU.  On day 6, she had to get tested for hearing and then take the car seat test.  She had to sit in the car seat for an hour and half hooked up to monitors.  Normally, a baby will fall asleep during the test, not this one!

She started to cry a little bit so we were really nervous!  I sat on the ground and rocked her for an hour while we held our breath. We wanted her to pass so we could take her home!  She made it! (She did end up falling asleep the last five minutes.)

By the end of the week, her monitoring looked good.  Her breathing was back to normal and she had great eating habits.  In fact, the bump on the back of her head was completely gone.

She is such a trooper!