Skip to primary content
On Saturday, October 23, the crew set out to do a 12 hour relay mountain bike race in El Paso. Jonny, Kimball, Brad, Jared, Lisa, Paul, Mike and I showed up to race for five different teams. Jonny, Kimball, and Brad were on one team. Jared joined another four man team. Mike was on a Crazy Cat four man team. Lisa and I were on a four girl team. And Paul raced on a duo team.
Lots of racing!
Here is Brad warming up for a lap.

The most crazy part is trying to rest in between laps. I tried to chill but I got too ancy!! Here is Lisa and I waiting for our girls to come. Her team beat mine.

Abel coming in and Jared taking off! 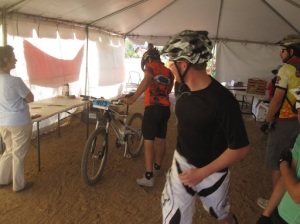 Mike getting ready to go out on his night ride. Night riding was so hard cause everything is two dimensional. I added like ten minutes on my time because of how sloppy I was!

Going out for my fastest lap. I was trying to hurry cause our team was losing.

You had to make the exchange in the tent and as soon as you called out your number, you took off!

Overall it was a very fun and exciting day. I wish we got more pictures!