Last week Mike was feeling numb in the nose area of his face.  Since we had the scare in April of 2011 when Mike lost his eyesight to optic neuritis, we were a little on edge waiting to see if symptoms got worse this week.  A couple of days later the side of his face started going numb all the way up to his scalp.

With a little provoking at the doctor’s office to get Mike in as soon as possible (which required me sitting in the waiting room while he was at work and negotiating with the secretary), we were able to get him into a quick appointment that afternoon where the doctor diagnosed a new lesion near his brain stem (different from the previous few he has) and quickly sent us to Memorial Medical Center for infusion therapy. 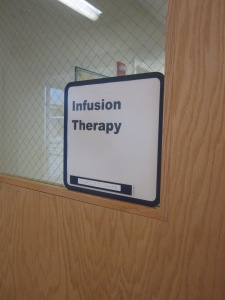 There are so many theories as to why we think these lesions are popping up.  Multiple Sclerosis is one of those diseases that no one really knows the cause.  There are so many theories out there as to why it is so common now and what causes it.  I am all for research on it so that they can find the cause!  I find it strange that the optic neuritis from two years ago was in the same month.  We’ve researched so many things linked to MS, which includes stress, heat, and genetics, that it could be anything! 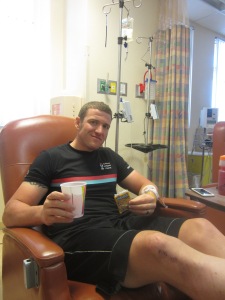 This time Mike had to have steroid treatments for three days in a row instead of five days, which we were excited about.  Last time at about day three, Mike was feeling super bloated and could hardly breathe.  A few of the symptoms from this therapy is queasiness, bloating in the stomach and chest area, and insomnia. 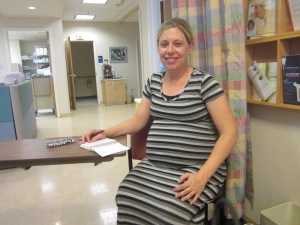 (Yes, I look nine months pregnant…because I am.  Try not to notice the lack of makeup and grooming.  I promise when this baby comes that I will worry more about public appearances.)

I was glad to spend time with Mike this time because last time I had to work the whole time he went into therapy.  It makes the time go by faster and I am cherishing these one on one times now that the baby is looming around the corner.  Too bad it had to be in a hospital!  Mike has been riding his bike and going to the gym and it seems to make him feel a little bit better this time around. 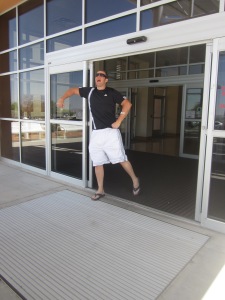 This picture was taken on day three.  We were/are so excited to not have to go back there (and hopefully not for a long, long time).  I must say that the staff at MMC Infusion Therapy are the nicest people I have ever met.  I am so impressed.

Now it’s a pill version of a steroid (not the good kind) for a couple of weeks.  Keep your fingers crossed that he bounces back! We hope the lesion will decrease in size and stay away from that brain stem!