Last year Mike and I did the Color Run in Albuquerque with his brothers (which ended up being a fiasco of losing our car keys and spending two days trying to get them remade…meanwhile, finding out I was pregnant).  This year, we found out it was going to be a little closer to home, so we had to go try it out with my good friend Stephanie and her husband Bill. 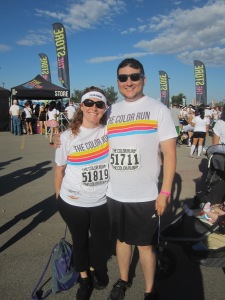 We had to have Olivia try out the shenanigans too, so we brought the jogging stroller and put a weather shield over it to protect her.

We had to stand at the start for a while because of the congestion.  It was a pretty big crowd.  Meanwhile, people were already busting out with the paints in the air! 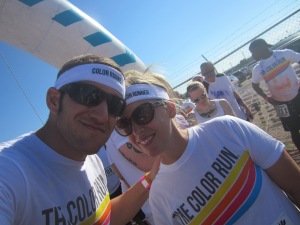 Olivia was already getting bombarded! 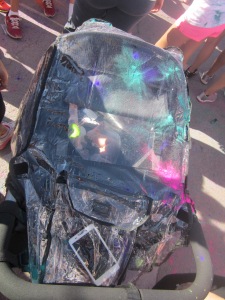 Mike took the stroller for the first half of the race.  He looks so cheesy in this picture!

I love this shot of all the “haze” left over from the pink portion. 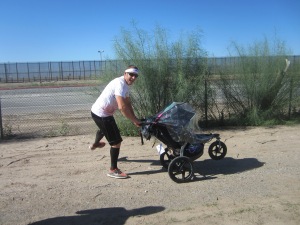 I took over mid-way and was trying to find a way to avoid the colors with the stroller.  That was not happening!

I was kind of bummed because the end was so congested, you really couldn’t run it!  It was more like a walk from the 1.5 mile mark.  I wish they had more street space on this one.

And this is what happens when you wake up a sleeping stroller child.  (Yes, she got a little warm.)

Overall, it was fun.  I would say that if they changed the venue that I would do it again in El Paso. Otherwise, I am willing to go back up to Albuquerque next year.  What a fun way to get people out running.

Thanks to the Kellys for joining us!