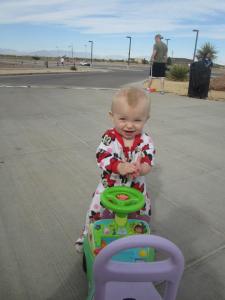 My “fan” playing with her car while I was out racing….

It has been a while since I have updated our races around here on the blog.  Unfortunately I haven’t raced a lot since we are down to one paycheck right now while I stay home with Olivia.  Only one of us can race at a time, so I usually push Mike to race!

But, I was so excited to do my first duathlon back in April! Last year Mike signed up for the Joker Duathlon knowing that Olivia’s due date was the same weekend.  We figured she wouldn’t be on time….boy were we wrong! I started going into labor that morning.  Mike and I were trying to decide whether or not he should just go since we knew it would be a while, but we didn’t want to chance it.

Now a year later….in honor of Olivia…mom had to give it a try! 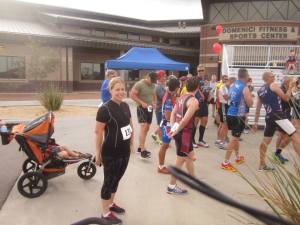 Considering I am still twenty pounds up from my pre-pregnancy weight, I knew I would have some difficulty, but I really had a lot of fun.  This was taken at the starting line at Holloman Air Force Base.  I was so nervous! I had never done a duathlon before. 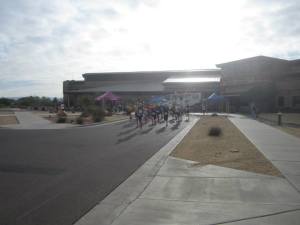 And we were off.  The first run was an 8k and we took a path out to a cone and turned around.  I actually liked how flat it was and was holding a pretty steady pace at around 9 minutes per mile. I didn’t want to overdo it because I knew the bike was coming up.

Transitioning was a little hard for me because I couldn’t get my shoes on and I was worrying about Olivia (which I shouldn’t have!).  But I was soon off and on an awesome bike route of 18 miles.  We went around the super nice roads of the base and then turned around and came back the same way we came so I could see who my competition was ahead of me.

The road was a little windy going out and I was super hesitant about going fast.  I made it my goal to do the bike in under an hour.  I really wanted to beat all of the girls!

I passed a lot of people on the way out.  I give Mike the credit of coaching me on how to TT even without a TT bike.  I was in the middle of the pack on running but was catching up to some of the faster runners on a bike.  By the end, I was around two girls that I knew I had to get on the run.  All three of us came back on the bike at the same time.

I took off running for the next 5k making sure to watch the girls.  We all kept a pretty similar pace out and then made the turn around.  I was able to pass one girl, but the other one was pretty fast and was gaining speed. 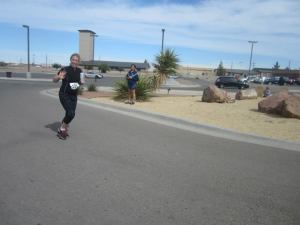 I made it to the finish line….seconds…behind the girl and got 2nd place because of that!  I was really happy with my effort and glad I was able to do it.  I also was able to bike in just under an hour. I definitely will race this again!  It was awesome!